These are some of the animals currently residing at Heart and Hoof. Most were abused, neglected, unwanted, or scheduled to be euthanized prior to their arrival. At Heart and Hoof they are in a safe, loving environment and are guaranteed a home where they can live out their lives with us and with each other. 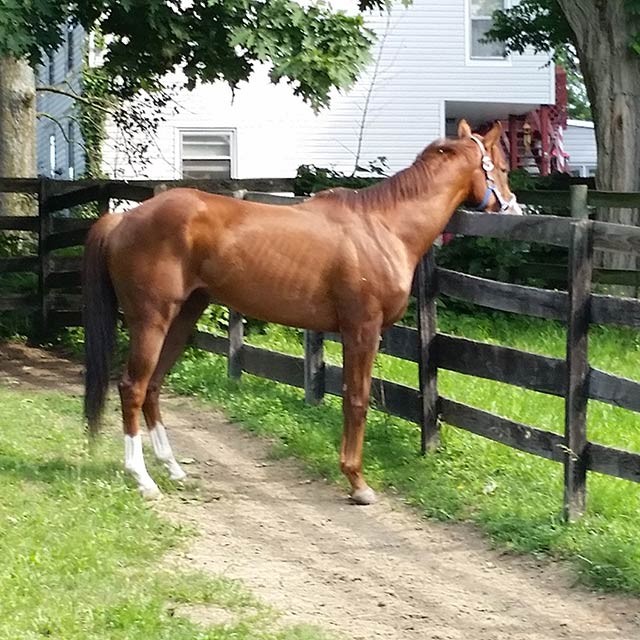 Time is an 8 year old thoroughbred who had 7 wins racing under the name “Time has Come” before a knee fracture ended his career and made it impossible to rehabilitate him into a riding horse. Unable to race, he made the decision to come  to Heart and Hoof and spend his days grazing with his many friends. 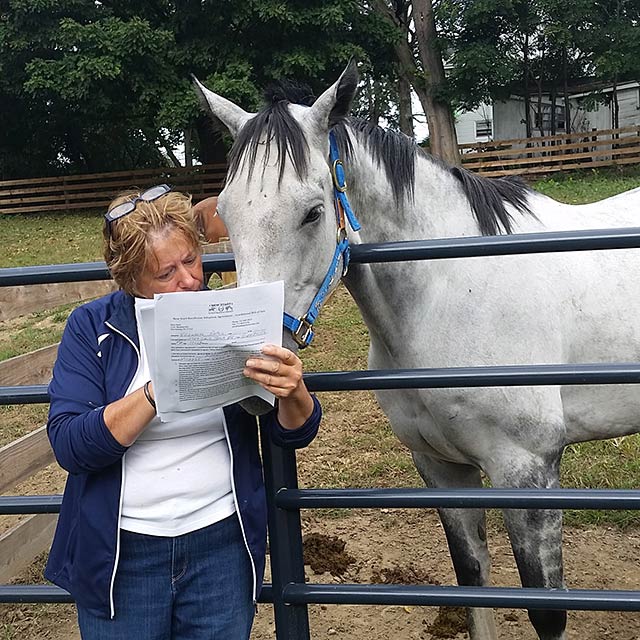 Romp, who raced as Romp City, had a number of wins while racing but a broken ankle ended his racing career and brought him to Heart and Hoof.  He can be seen here reading over his adoption papers with Beth. 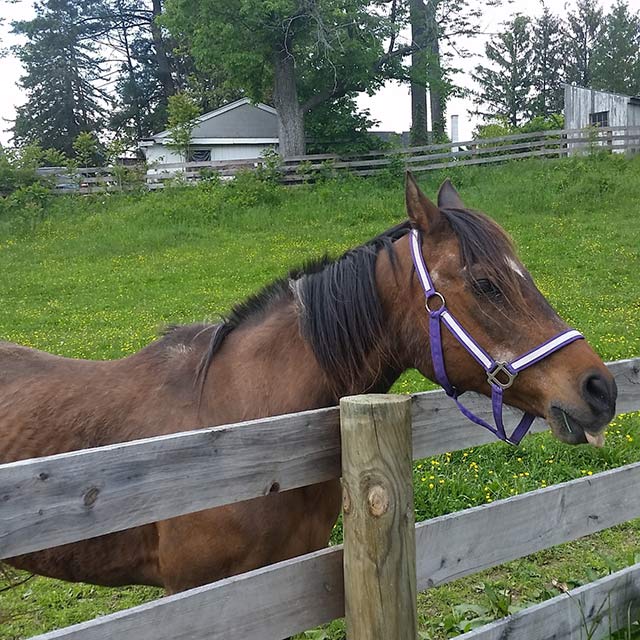 Tucker is a pony in his late 30’s who spent his life giving rides to children until he became too old to work. He too decided to retire at Heart and Hoof, where he remains very social and active in his golden years. 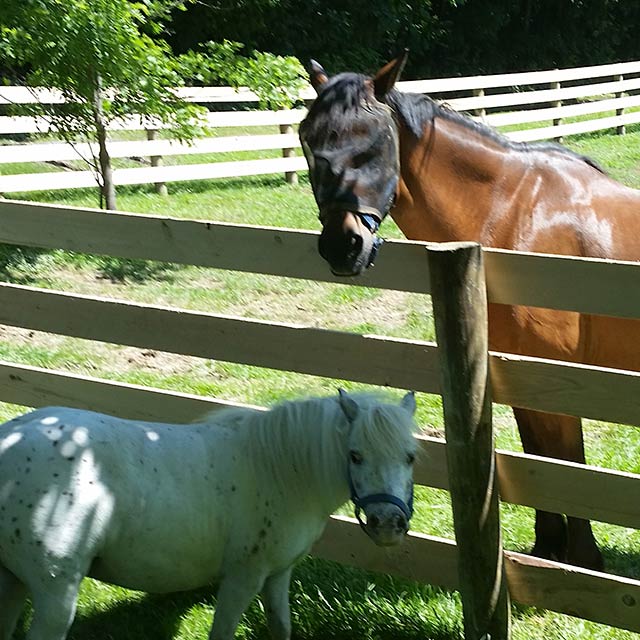 Chick is a quarter horse in her late 30’s who was a barrel racer in her youth. She is blind and we keep her eyes covered in the summer to protect against flies. She and Tucker are roommates in the same paddock each day where Chick has learned her way around and these two gentle souls can keep each other company while grazing. 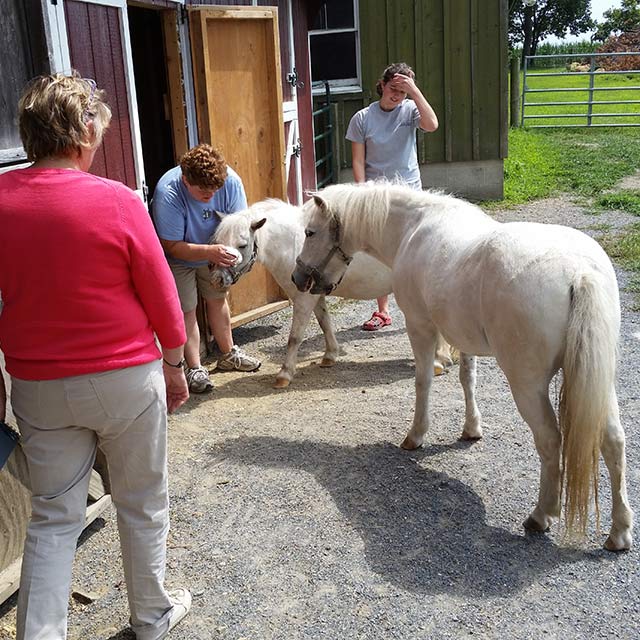 Daisy and Spray joined the farm when their owner was no longer able to care for them. They have chronic problems with their hooves (for which Leslie, the H&H farrier, has provided exceptional care) and both have Cushing’s Disease, diagnosed and treated by Dr. Nikki, the H&H veterinarian. 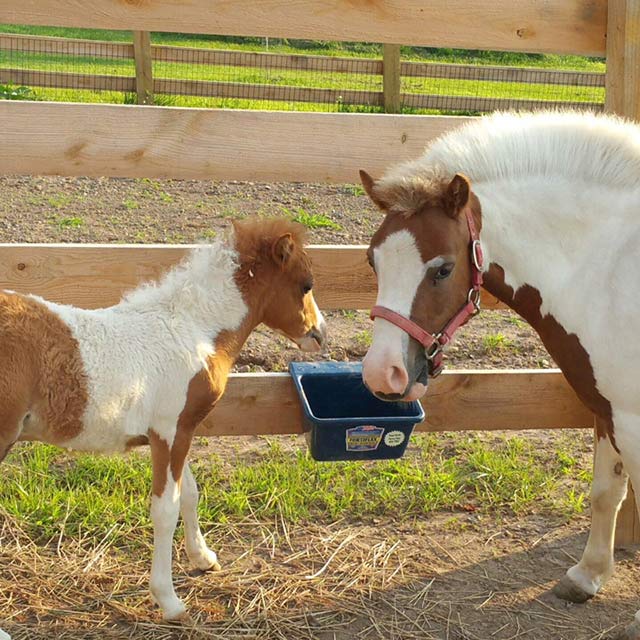 These mini horses all came off the same farm that was the site of a large animal rescue effort.  Sweet Pea could not walk at the time of the rescue due to long curled hooves and was taken to a neighboring farm for treatment, where she was found to be pregnant with Peanut. Peanut was born and She and mother Sweet Pea came to Heart and Hoof.  Charlie, with rare ice blue eyes and a big horse attitude, is a favorite of Ella’s. 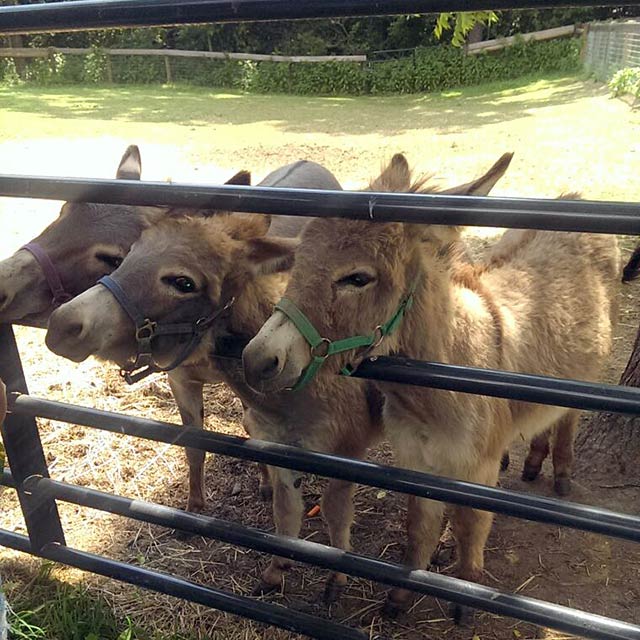 Peter, Paul, and Mary are donkeys who came to the farm together.  They are rarely more than a few feet from each other and will stir up trouble at any opportunity.  If Heart and Hoof were a circus, these 3 would certainly be the clowns. It is hard to look at these little guys (and girl) and not smile. They devil the large race horses every chance they get. 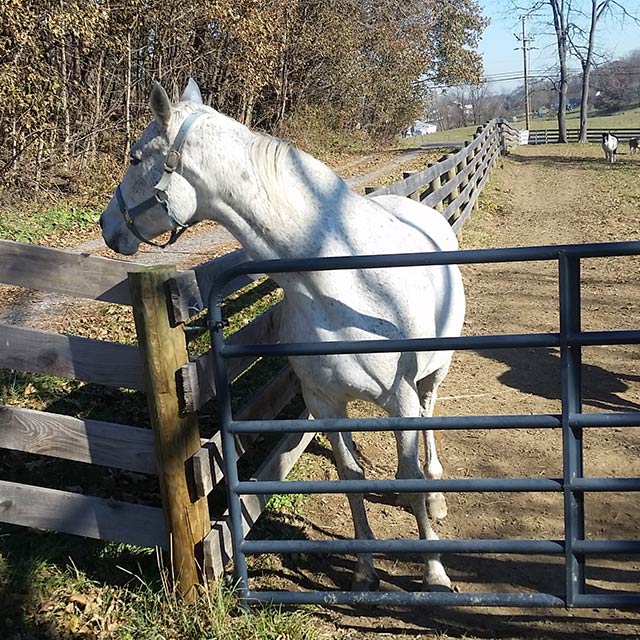 Rama had one win racing as “Ramadan Moon” and then was a successful brood mare for 16 years until age caught up with her. She came from a good home and is simply at the farm in her retirement. Several of Mama’s offspring are still successful race horses.